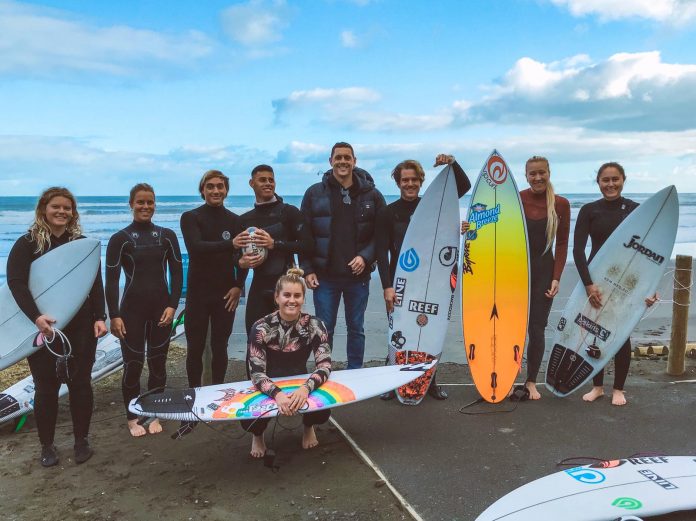 The camp was made possible with the support of the New Zealand Olympic Committee and funding from the Olympic Solidarity Fund.

Attending surfers have an eye on future success both on the World Surf League Qualifying Series and the International Surfing Association events acting as the final Olympic qualification option as we head toward Tokyo 2020 in July next year.

Day one of the camp was held at the University of Waikato Adams Centre for High Performance, Mount Maunganui and focused on strength and conditioning led by Dr Oliver Farley, of Farley Performance Training.

“I specifically focused on teaching the fundamentals of training, correct movement patterns.  These are the essentials our top surfers should all be working on in their training programmes, with the major focus on power and gymnastic work and an emphasis on airs/lands and rotations – all linking into their air game” comment Farley.

Physiotherapist Michelle Rellis was on hand to offer each athlete professional support and assessments.  Rellis has been instrumental in Stairmand’s rehabilitation from a knee injury sustained at the start of March which kept the Raglan surfer out of the water for over three months.

Due to a less than favourable swell forecast the call was made to travel to Raglan on Friday evening for day two where the focus was on technique and strategy.  Head Coach Matt Scorringe led the session in fun waves at the beach.

“It was so exciting to be working with this calibre of talent again and after such a disruptive start to the year for everyone, it was awesome to get the ball rolling again as a team” commented Scorringe.

The Rip Curl Pro Raglan presented by Backdoor, scheduled for September 11-13, will be the next opportunity for our top surfers to pull on a rash vest and put their skills to work.

The qualification process for Tokyo 2020 has been determined by the IOC and the International Surfing Association.  New Zealand surfers will be able to qualify via the next ISA World Surfing Games which have yet to be confirmed for 2020 or 2021.  You can read about the full qualification process via the ISA website.

A total of 20 males and 20 females from around the world will compete at the Olympic Games.  Kiwi surfers that qualify via the WSL or ISA will then need to be selected by the NZOC to represent New Zealand.

More about our coaching team:

Matt Scorringe – The Art of Surfing Founder/Head Coach
The Art of Surfing offers surf-specific high performance coaching for all abilities, from the recreational surfer to the pro. Specialising in technique, video analysis, equipment and competition-based fundamentals

Dr Oliver Farley – Farley Performance Training
Since completing his Masters at AUT researching the physiological aspects of surfing, Olly obtained a role at the Hurley Surfing Australia High Performance Centre as lead exercise physiologist (2013 – 2016). During this time he completed his Ph.D. researching surfing performance enhancement and worked with professional surfers competing on the World Championship Tour.

King and Queen of the Point Highlights

King and Queen of the Point Highlights

Stairmand and Hareb crowned Champions at King and Queen of the...

Junior Surfers Spearhead Start of King and Queen of the Point...