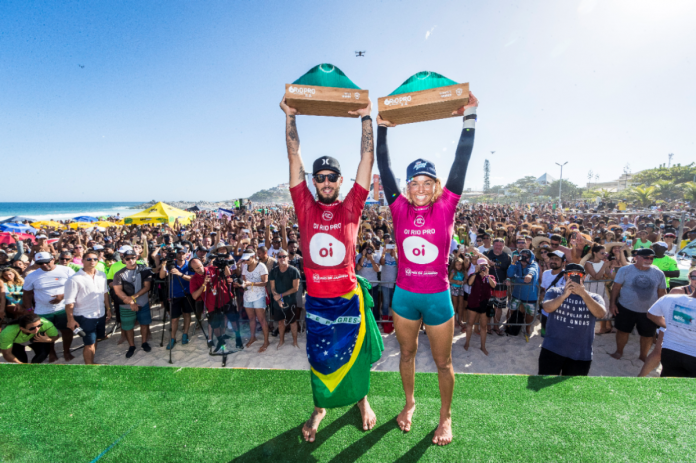 SAQUAREMA, Rio de Janeiro/Brasil (Sunday, June 23, 20199) – Today Filipe Toledo (BRA) and Sally Fitzgibbons (AUS) won the Oi Rio Pro, Stop No. 5 on the 2019 World Surf League (WSL) Championship Tour (CT). The beach came alive throughout the Oi Rio Pro with thousands of fans each day, including today’s Final at Barrinha in four-to-six foot (1.2 – 1.8 meter) waves. Fitzgibbons and Toledo surfed a full day from the Quarterfinals to the Final, resulting in their third CT victories in Brasil.

Toledo successfully repeated last year’s victory at Barrinha with dominant performances against Jordy Smith (ZAF) in the Final, Frederico Morais (PRT) in the Semifinals, and Kanoa Igarashi (JPN) in the Quarterfinals. This is Toledo’s third win in Brasil (2015, 2018, 2019) and the eighth of his career.

“Once I get into the Quarters and Semis, it’s like something clicks in my head, especially here in Brasil,” said Toledo. “The crowd just gets me pumped and I just want to do my best. But it’s so hard, surfing can be anybody’s game. With Jordy (Smith) you never know. I had eighteen points, but he could’ve easily gotten two nines as well. I was tense until the last thirty seconds, but that first wave got me feeling pretty confident and I was stoked to get that one.”

Later on, at the awards podium, Toledo opened up and revealed that he was going through some personal issues throughout the year, but that the energetic Brasilian crowd provided the extra fuel he needed to push through.

“It can be really difficult if you don’t surround yourself with a good support crew and prepare yourself psychologically,” continued Toledo. “If you’re not prepared, the pressure can really get to you. What I really enjoy is the emotion and energy from the fans in Brasil. This gives me energy, focus, and motivation. I’ve been sick all week and feeling really weak and tired. But every time I ran down the corridor to the water, the energy from the crowd would give me a boost. A lot of people don’t know, but I’ve been going through a very difficult year personally. It’s been tough to concentrate on doing what I love most, but the crowd is what pulled me through and I’m eternally grateful. Now let’s head to another of my favorite waves at J-Bay.”

The Brasilian hero is back in the top five, moving up three spots to No. 3 on the world rankings. The next event on the CT is the Corona Open J-Bay, where Toledo is also the defending event winner. With his first win in 2019, Toledo will be fired up heading into an event where he can again defend his event Title.

Smith’s runner-up finish advances him one place up to No. 4 on the Jeep Leaderboard and that much closer to his maiden World Title. The 31-year-old has made the Final Series four times so far this year with only one early exit in Bali. Smith now returns to the Corona Open J-Bay as the obvious favorite in his home country of South Africa where he will now be welcomed home by his fans.

“I think Filipe (Toledo) had a massive support crew down here today,” said Smith. “I think the first wave was a momentum shifter. The wedge moved a little inside, and I missed it, and Filipe got barreled and did an air to a blow-tail and that was just kind of it. The wind picked up right after, but what can I say? He’s an incredible surfer, and I was just honored to be in a Final and was pleased to finally make one this year. It was a great event and there’s no other crowd like this in the world. I just hope that at J-Bay they can share a little bit of love my way.”

California’s Kolohe Andino (USA) lost to Smith in the second Semifinal but still holds his position as No. 2 on the world rankings behind John John Florence (HAW). Andino is gunning for his maiden World Title and his first CT event win in 2019 and shows no sign of slowing down. He came incredibly close in two Finals already this year (Gold Coast, Margaret River) and continued his form in Brasil.

Fitzgibbons’ win today is her first CT victory since 2017 and her third in Brasil (2012, 2014, 2019). This season the Australian superstar has secured consistent results with four Final Series appearances, including two Finals. Fitzgibbon’s win vaults her to No. 1 in the world, surpassing Stephanie Gilmore (AUS) and Carissa Moore (HAW) on the Jeep Leaderboard.

“It’s definitely one of those feelings where you feel so alive,” said Fitzgibbons. “The whole process of running down through the crowd cheering and paddling out is pretty sick when it all comes together. After all these years it’s still special and to be in the Final with a friend like Carissa (Moore) is pretty amazing. It could’ve gone either way and it just went my way today, it was unbelievable, this is insane. I knew I needed something special at the end when that set wave came through. When I paddled in, I knew there was some opportunity and I just gave it everything. I just wanted to commit and everything just came together.”

En route to her 11th CT win, Fitzgibbons eliminated Moore in the Final, good friend Keely Andrew (AUS) in the Semifinals, and Lakey Peterson (USA) in the Quarterfinals. The CT veteran has come runner-up to the World Title three times, and this could be a breakthrough year after her success leading up to the season’s halfway mark.

Moore put up some of the strongest performances at the Oi Rio Pro but missed her shot at the event win by just 2.07 points. Fitzgibbons closed the door of the Final with an excellent 8.67 (out of a possible 10), leaving Moore searching for the requirement in the final five minutes. Moore hasn’t lost yet before the Quarterfinals this year but still continues the quest for a win in 2019. The three-time WSL Champion moves ahead one place to World No. 2, also advancing past Gilmore, who drops to No. 3.

“It’s been a really positive year and I’m really happy to make the Finals,” said Moore. “It’s a keeper event for me, but of course, it would’ve been great to win. I’m happy for Sally (Fitzgibbons) and I’m feeling good overall. Like I mentioned after my first round, I would’ve been happy just making it to the Semis, so second place is great. Saquarema has treated me really well, the waves have been fun but challenging and the crowd has been great, so it’s been really good energy for sure.”

Board Appointments and Upcoming Board Elections